The Redevelopment Authority of the County of York (RACY), Hanover Economic Development Corporation (HEDC), and the Borough of Hanover announced the acquisition of the historic Hanover Theater, located on Frederick Street in Downtown Hanover. This is the first time the theater has been publicly-owned in its 95-year history, clearing a path for its redevelopment.

Originally opened in 1928 as the State Theater to host silent movies and stage shows, the 14,000 square foot building served as a performance space, club, and movie theater over the subsequent decades prior to being shuttered in 1984.  Since then, the building has been vacant and long-considered a major redevelopment opportunity in close proximity to Hanover’s square and downtown business district.

“This is an exciting moment for our Borough,” noted HEDC chairman, Oliver Hoar. “Public ownership of the theater allows us to better-guide its future redevelopment by issuing a request for proposals from private developers to bring their best ideas for its future use—and their capital—to the table to ensure the Theater once again becomes a community asset.”

HEDC secured acquisition funding from the J. William Warehime Foundation, and RACY intends to transfer the property to HEDC during redevelopment.

“RACY is pleased to partner with HEDC and other Hanover partners to acquire the theater and hold it for redevelopment,” said RACY Chairman Tom Englerth. “In recent years, RACY has assisted with the redevelopment of the McAllister Hotel and Plaza 34, and the theater is a similar landmark structure with transformational potential for the downtown Hanover.”

YCEA provides staff support and technical assistance to both RACY and HEDC.

“Acquisition of the Hanover Theater demonstrates what our communities can achieve when county, borough, and private resources align behind a common vision for economic development,” noted YCEA Vice President for Economic & Community Development Silas Chamberlin, who also serves as RACY’s executive director. “The Hanover Theater is one of several major initiatives currently underway in Hanover, and it’s exciting to see York County’s second largest municipality at a pivotal moment in its revitalization.”

In the coming months, HEDC will issue a public request for proposals from qualified firms interested in redeveloping and eventually acquiring the theater. 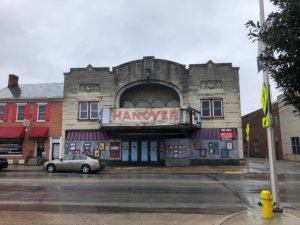 About the Redevelopment Authority of the County of York
RACY plays an integral role in rehabilitation projects by holding title to a property while it is being developed, securing grant and loan funding, or assisting with master planning and blight designation.

About the Hanover Economic Development Corporation
HEDC is a non-profit corporation, created by the Borough of Hanover to increase economic prosperity and promote economic development throughout the community.