The York County Industrial Development Authority (YCIDA), staffed by the York County Economic Alliance (YCEA), is pleased to launch the John A. Lambert Hospitality Training program, in honor of Mr. John A. Lambert, one of the Yorktowne’s most recognized and tenured employees. This program is in partnership with Crispus Attucks, York College of Pennsylvania, and GF Hotels & Resorts.

This hospitality training program will be offered at no cost and will prepare individuals for a career in the hospitality industry. Attendance at the classes and completion with a passing grade of the corresponding exam will result in a certificate from the nationally recognized American Hotel and Lodging Educational Institute. All classes will be taught by industry professionals, and held in the Crispus Attucks computer lab at 605 S Duke St, York, PA 17401. These classes will be offered from September 12 through September 28 in the evenings and weekends, with classes available in Spanish upon request.

This program is named in honor of John Lambert, who began his long career with the Yorktowne Hotel at the age of 17 in 1943 working as a dishwasher. He would leave school every Wednesday at 11:30 a.m. and return to school at 2 p.m. In describing the working relationship between the high school and the Yorktowne, he remarked that “kids could always find work at The Yorktowne.” He guided many employees in the art of fine dining service and said that “a good waiter needed a good busboy, and a good busboy needed a good waiter.” After temporarily leaving for two years to work at the Out Door Country Club, Lambert returned to The Yorktowne Hotel and worked at the Yorktowne on and off for decades, but always more on than off. until his retirement in 2007 in his 80’s. During Mr. Lambert’s tenure, he served Lady Margaret Thatcher; the first female Prime Minister of the United Kingdom, Colin Powell; the first African American to be appointed as the U.S. Secretary of State, and President George W. Bush; who gifted John his tie pin, to name a few.

All participants and the public interested in working for the Yorktowne Hotel as it prepares to open are also encouraged to attend the York Hiring Fair on Thursday, September 15 from 12pm to 4pm at PeoplesBank Park, 5 Brooks Robinson Way, York PA 17401, and the Yorktowne Hiring Days from 9am to 4pm September 19-21 at the York County Economic Alliance, 144 Roosevelt Ave, York PA 17401.

This training program is made possible with the generous support from the Women’s Giving Circle and the Rotary Club of York for supporting this effort. 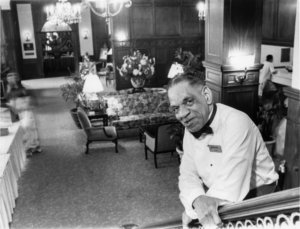